After three days in Chiang Mai, it was time to head south to Krabi.

We decided to spend a night in Krabi town before making the trek out to the island of Koh Lanta. We heard time and time again that Krabi is the best of the beach resort areas–not nearly as affected by the plight of tourism than the more populated Phuket. Well, I’d hate to see Phuket, because Krabi is a real dump. The town is packed full of tourist orientated resteraunts serving western food, with little in the way of authentic experiences. We found one dining establishment which was full of what appeared to be locals dining, and we had some great fresh seafood which we selected ourselves to have thrown on the barbeque. However, it wasn’t particularly cheap! 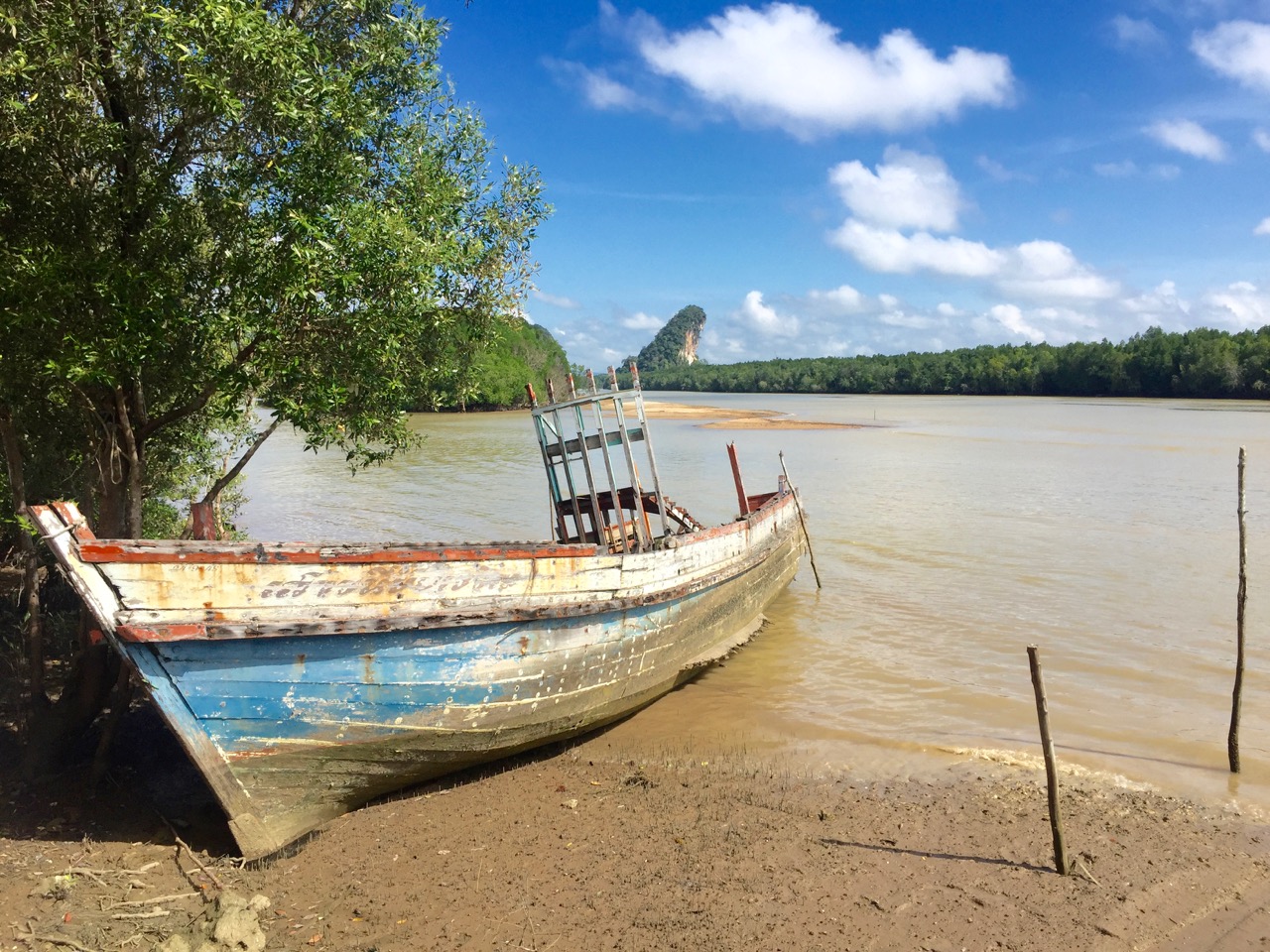 The scam-centric approach to tourism was back too, as bad as if not worse than Bangkok. Local taxis are hard to come by, and often don’t even have meters installed. Then there’s the long-tails..

In pictures, Railay beach looks absolutely incredible - and it is, incredible looking at least - but first, you need to get there.

That means finding a Long-Tail Boat driver to take you across the bay. Trip Advisor suggested finding a boat with some tourists already on board, and waiting for it to fill - but information beyond this was hard to come by. After more than an hour wandering around in mid-day heat from pier to pier, we eventually found a collection of Long-Tail Boat Drivers. Missing was the boat full of tourists waiting to depart - meaning we had to rent the full boat. None the less, we hired the entire boat for the trip for 600thb split amongst 4, the driver proceeded to crawl across the bay (saving fuel to make up for the reduced fare?), and we arrived at Railey Beach. The limestone cliffs on arrival looks incredible, but signs of over-development show through. The passage between Railey West and East passes the back of every tourist resort, their sewage treatment plants (..at least it gets treated?), and we were glad to arrive on Railey East, the beach best suited to swimming. After all the effort it took to get there, we were more than a little disappointed to find dirty, oil laced water, ridden with hidden jellyfish larve which leave a sting not too unlike that of a nettle. Of course, since we're now on a peninsula with access only by water, the Long Tails have tourists at their whim for the return trip. The boat operators opperate in a cartel, all agreeing on a fixed price to prevent any competition. Railay? Avoid it..

Our first impression of Koh Lanta wasn’t the most positive - assaulted by hawkers agressively trying to sell us tuk-tuk and taxi rides across the island. It was no surprise then, when somebody dressed in plain clothes with a shabby booth demanded a 10THB ($N.NN) “island cleaning fee”, tried clinging on to me to make me pay, couldn’t produce any official ID, and then promptly got dragged along the pier with me. Turns out it was official - but hey, maybe it’s time to clean up the hawkers? After this initial impression, we rented some scooters and departed by darkness, laden down with our heavy backpacks. By night, the island around the ferry terminal was thick with awful tourist traps, but when we reached the branch of the road where we were staying, it quickly cleared out to reveal clear stretches of coastline which seemed appealing even by dark. Daylight confirmed - the nice section of the island is the branch off the main road, where resorts become more high-end and the beaches less populated. Had we not seen this, I think we’d be leaving with a different impression of the island.

We enjoyed a particularly memorable meal (and many happy hour cocktails) at Beaches/Breezey Bar/Peaches, (//TODO: peaches?) and in retrospect would have loved to have stayed at the hotel attached. We also visited Moh Koh Lanta National Park - the scenery gets most impressive, the entry fee is low, and the view from the small elevation at the Lighthouse is well worth the climb.

The stinging jellyfish larve were still present, but in much fewer numbers, and we even got a brief snorkelling session in on a small reef off the lighthouse. Watch the local monkey population however - they know how to open bags, and are truly vicious. We had to steer cleer of any wooded area when in the national park. We also travelled to the other side of Koh Lanta by scooter - seeing the old town, and raised houses on the water (//TODO: GMAp link) where local fisherman and Long Tail drivers lived was refreshing from the tourist traps we encountered elsewhere.

Koh Lanta ended up as one of the highlights of Thailand - it was an island with some beautiful, unspoiled corners. It was easier than most to access from Krabi, and well worth visiting.

After our time in Krabi, we’re now departing for Vietnam. Thailand has been a mixed bag. The tourism industry has been over-developed to the point of suffocation, something which has been very evident here in Krabi as they have a very quiet “high season”. There’s a tendency to treat tourists as subjects to be exploited, rather than something the local economy can collectively tap into. I can’t help but leave a little disappointed, especially by the small portion of coastal Thailand we saw. What we saw was far from the deserted tropical paradise we had envisioned. Next time, maybe travelling off the beaten path to islands even less developed, albeit further away, might be the answer. We also tried dining via the best of what Trip Advisor recommended - I’m normally a big fan of making purchasing decisions based on peer reviews. Here however, it just lead us to eating with fellow tourists. The same menu appeared no matter where we travelled to - the same Pad Thai, Red & Green Curry and Tom Yum, along with a token hamburger or pasta dish. Toward the end of the trip, we developed a more reliable metric - find the places both busy, and full of locals!

There’s also some very authentic experiences to be had - Chiang Mai being the highlight. The locals were exceedingly honest and friendly, and the city was very clean. It was the perfect melting pot of local city and tourist hotspot, and I’d gladly return.